Professors Danielle Endres and Michael Middleton's book Participatory Critical Rhetoric (Lexington Books, 2015) has been announced as winner of the Outstanding Book of the Year Award from NCA's Critical/Cultural Studies Division.

The co-authored book, titled Participatory Critical Rhetoric: Theoretical and Methodological Foundations for Studying Rhetoric In Situ, was written by Michael Middleton, Aaron Hess, Danielle Endres and Samantha Senda-Cook. Dr. Middleton and Dr. Endres are associate professors in the Department of Communication, and Dr. Senda-Cook is a recent Ph.D. graduate. 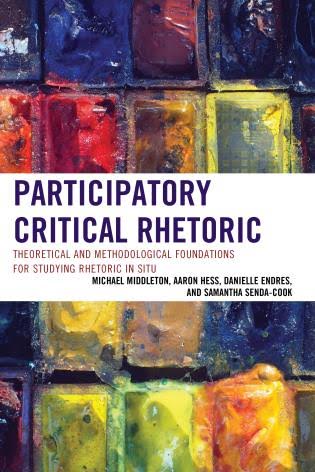 Increasingly, rhetorical scholars are using fieldwork and other ethnographic, performance, and qualitative methods to access, document, and analyze forms of everyday in situ rhetoric rather than using already documented texts. In this book, the authors argue that participatory critical rhetoric, as an approach to in situ rhetoric, is a theoretically, methodologically, and praxiologically robust approach to critical rhetorical studies. This book addresses how participatory critical rhetoric furthers understanding of the significant role that rhetoric plays in everyday life through expanding the archive of rhetorical practices and texts, emplacing rhetorical critics in direct conversation with rhetors and audiences at the moment of rhetorical invention, and highlighting marginalized voices that might otherwise go unnoticed.

This book organizes the theoretical and methodological foundations of participatory critical rhetoric through four vectors that enhance conventional rhetorical approaches: 1) the political commitments of the critic; 2) rhetorical reflexivity and the role of the embodied critic; 3) emplaced rhetoric and the interplay between the field, text, and context; and 4) multiperspectival judgment that is informed by direct participation with rhetors and audiences. In addition to laying the groundwork and advocating for the approach, Participatory Critical Rhetoric also offers significant contributions to rhetorical theory and criticism more broadly by revisiting the field’s understanding of core topics such as role of the critic, text/context, audience, rhetorical effect, and the purpose of criticism. Further, it enhances theoretical conversations about material rhetoric, place/space, affect, intersectional rhetoric, embodiment, and rhetorical reflexivity.

Purchase the book or learn more about it here. Congratulations on this prestigious award!