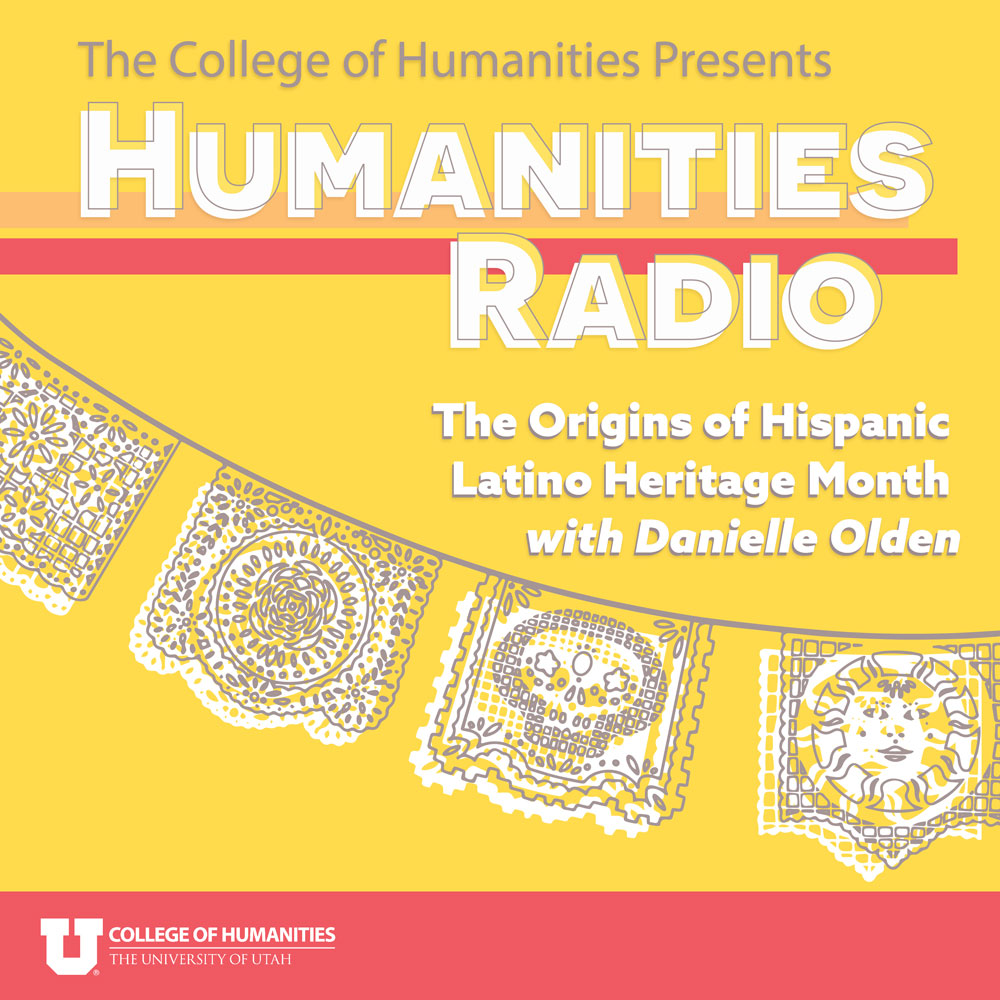 Jana Cunningham: Hello. Thank you for joining me on Humanities Radio. I'm Jana Cunningham with the University of Utah College of Humanities. And today, we're discussing National Hispanic Latino Heritage Month; its origins, transformation and shortcomings. Danielle Olden, assistant professor of history is with me to discuss more.

Jana Cunningham: From September 15th to October 15th, Americans observed National Hispanic Latino Heritage Month. Let's begin with just the origins of the month, when and how did it begin?

Danielle Olden: So the Latino or Hispanic Heritage Month began first in 1968, and it really emerged in response to the social movements that were happening in the 1960s. And so Mexican Americans or Chicanxs as they called themselves at that time were really pushing by 1968 for major educational reforms in the US system. And this was of course in response to their previous educational experiences, which they felt were lacking in many ways.

Danielle Olden: So a primary objective of the Chicanx student movements were to achieve things like bilingual education programs, as well as what we would today call courses in ethnic studies or Chicanx studies. And so they really wanted history courses, in particular, history and culture, but history has played a really important part in the demands that they were making because the history classes that they were taking and that they were gaining in the public schools were not reflective of their lives in any way. And they really had no good conception of the ways that Mexican Americans and other Latinxs had contributed to American history, right, and the roles they had played and how their families and ancestors have contributed. And so through those various social movements, I think it's really where we get this idea of Hispanic or Latino Heritage Month.

Danielle Olden: So it began as National Hispanic Heritage Week, and that was in 1968.

Jana Cunningham: Okay. And then when did it become National Hispanic Latino Heritage Month?

Danielle Olden: So over the next couple of decades, more and more people started advocating for a longer period of time, obviously a week isn't enough to do this. And so it was actually in 1988. So the initial law in 1968 was signed by President Lyndon Johnson, and then it was expanded to a month to Hispanic Heritage Month in 1988, and that was signed into law by President Reagan.

Jana Cunningham: Okay. And then since 1988, how has the observance of this month changed and what changes have taken place?

Danielle Olden: Well, I think initially the idea behind it was really to focus in particular on K-12 education. The idea was to develop particular units or curriculum that social studies teachers and music teachers and even PE teachers, they could come up with dancing units or things like that. So it was to get that type of curriculum into the K-12 schools. And again, this is because none of this is being taught in the regular K-12 curriculum.

Danielle Olden: Since that time, it's remained an important part of K-12 curriculum, but I think it's really expanded. At the university level it's expanded, both in terms of what's happening educationally, but in terms of programming at universities and we do things now that are... we bring in speakers who can speak to a variety of issues. We bring in artists, poets and other visual artists. We bring in musicians. We show films like documentaries and other artistic expressions. All of that has become an important part of how we celebrate the month.

Danielle Olden: It's also expanded in the United States beyond just educational institutions. So today all sorts of different bodies or groups or entities celebrated, and so you'll see local governments, city governments, state governments, you'll see businesses participate, giant corporations, things like Chase Bank or PNC Bank or things like that. They all will have some type of recognition of the month. Whether or not they actually engage in any type of real programming is the question, and I think differs across different entities. But today there's a lot more recognition, I think, across the country that this is something that needs to be recognized if not really genuinely celebrated.

Jana Cunningham: And so let's talk about that recognition a little bit. Has it become less focused on education and history over time? The celebrations?

Danielle Olden: That's a great question, and I think that's perhaps my biggest critique of the entire idea of National Hispanic Latino Heritage Month, and the same goes for Black History Month and Women's History Month, and all of these things that we have. I think that all of them began really as I said, to try and just get something out into the public knowledge about the role of Latinxs in American society, and that was a great goal I think at the time.

Danielle Olden: Today I think that we've fallen back on the recognition of people who have made the major contributions, and we've fallen back on the celebration of culture, which again is important, but you're right. I think that these celebrations often do miss the more critical history that I'm more interested in as a historian. And I think perhaps one of the reasons for this is because it's only a month, and that goes back to the critique that these activists in the 1960s were making in the first place, which is that all of this needs to be more fully integrated into our history curriculum in general.

Danielle Olden: Let's start with a week, let's start with a month, but let's broaden it. And the problem is that for a lot of these entities that are celebrating, we haven't broadened it. And so if we just focus on a month, it's a lot easier to do the celebrating. Celebrating the people who have made America what it is, but then we do miss, well, why is it that higher number of Latinxs live in poverty? Why is that we have lower numbers of Latinx students graduating? Lower numbers of Latinx students going on to college and other higher education? Why do we have all of these wealth disparities and income disparities among different groups of Americans? Why do we have housing segregation? Why do we have these neighborhoods that are made up of majority Latinxs? Places like east Los Angeles or Spanish Harlem, or even the west side of Salt Lake City,

Danielle Olden: I think that the celebration lens, again, while important really limits that more critical understanding of the way that class and race and gender structure of the US society. It really sort of difficult ways to pinpoint, but I think history is really relevant for understanding those questions.

Jana Cunningham: So we've talked a little bit about K-12 and the education there. What about universities? How can universities and their students, and administration and faculty better honor and observe this month?

Danielle Olden: It's a difficult question because in general, I think most universities are doing a pretty good job of recognizing the month and sponsoring programming that students want and need and demand in fact. Showing those documentaries, bringing the filmmakers and the artists to campus and engaging with students, all of that is great and I think it's really important work. But I guess just going back to those original critique and demands of those students and the 1960s, the problem remains, which is that we haven't done a good job of making sure that Latinx history is central to our curriculums across the board and not just during the month between September 15th and October 15.

Danielle Olden: And so our university, I think, is sort of on that path and one of the ways that we've tried to ensure that students get a more diverse critical curriculum is by including a diversity requirement in our general education curriculum, and I think that's great. I'm a little biased as a historian and that I think that our students actually need more history courses in particular. So all the diversity credit is great. I think most students in fact get those credits outside of courses that are really engaging critically with history. And so I think that we could do a better job of making sure that students are getting that critical historical perspective in their general education curriculum, and making sure it's important beyond the month.

Jana Cunningham: That was Danielle Olden, assistant professor of history. For more information about the University of Utah College of Humanities, please visit humanities.utah.edu.