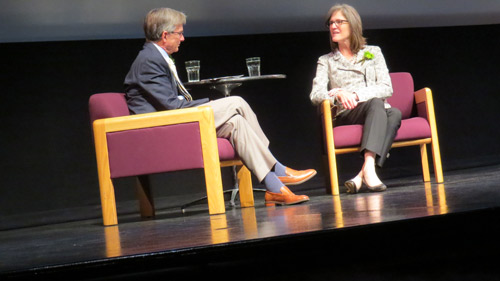 Our own Dean Dianne Harris and William “Bro” Adams, Chairman of the National Endowment for the Humanities, spoke at the Utah Humanities 2015 Human Ties Celebration event on Wednesday, August 26, at the Rose Wagner Theater. Harris and Adams spoke to the packed crowd on the topic of “Common Good: Humanities in the Public Square.”

Harris led the conversation with Adams, which revolved around the context of the Common Good initiative he had recently announced on the role of humanities in public dialogue. The two stressed that the humanities should not avoid the grand challenges of our contemporary issues but, rather, embrace and advocate for the humanities' role in addressing them.

Find more information on the Utah Humanities event and their 40th anniversary.