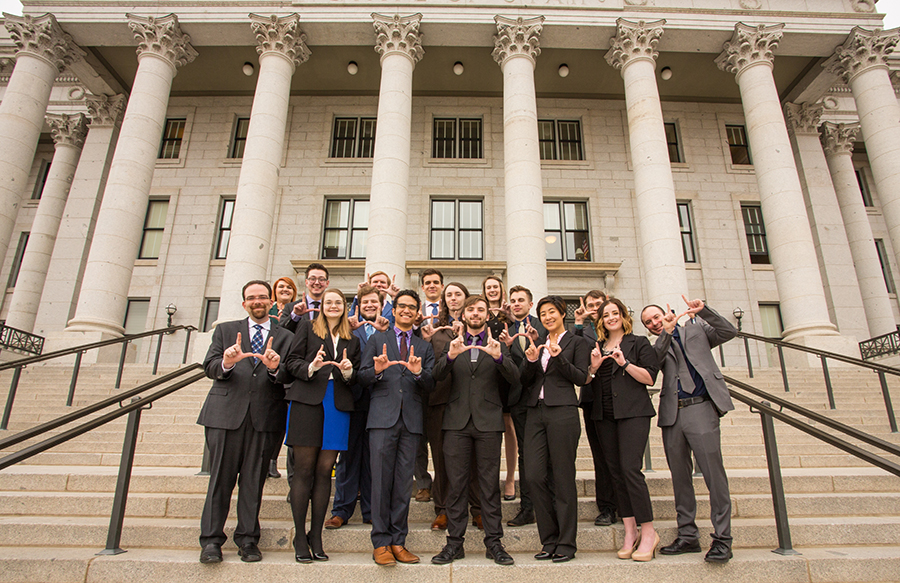 Feb. 5, 2018 – The University of Utah’s John R. Park Debate Society was recognized, Friday, Feb. 2, with a resolution by the Utah State Legislature. They were honored for their exemplary accomplishments including their advancement of teaching speech and debate, as well as receiving the 2016-17 season-long national championship awarded by the National Parliamentary Debate Association.

“The legislature’s recognition of the debate society underscores the competitive excellence we work to achieve as Utah’s oldest and most successful collegiate debate program, as well as the value we place on how the skills that we teach can be a part of shaping and improving political dialogue in the state,” said Michael Middleton, director of the John R. Park Debate Society. “Our entire coaching staff could not be prouder of the students who participate in the society and it is an honor to work with the best and brightest students from Utah and elsewhere who have contributed to this recognition and the other accomplishments of the program.”

The debate team had the honor of attending the resolution’s passage through the Utah House, followed by the Utah Senate.

In recent years, the team has enjoyed a close partnership with Alliance for a Better Utah co-hosting campaign debates. During the committee hearing, they offered their strong support of the resolution.

“I have had the great pleasure of working closely with the John R. Park Debate Society, its director Michael Middleton, and many of its members over the past two years,” said Chase Thomas, policy and advocacy counsel for Alliance for a Better Utah. “Our two organizations have come together to host many debates, and the way in which they organize and conduct our political debates with professionalism, fairness, and, perhaps most importantly, with impartiality, is not lost on those who participate. The involvement of the debate society has made these events not only a useful platform for the candidates, but also an invaluable resource for the public to become engaged in the democratic process.”

Sponsored and housed in the Department of Communication in the College of Humanities, the debate society welcomes undergraduate students from any major and any year to participate in activities. Students compete in five tournaments a semester and have finished in the top 10 nationally for the past four years.

Founded in 1869, the John R. Park Debate Society has hosted biannual forums for the past several years in an effort to educate the public and to facilitate civil dialogue about contentious political and social issues, high school clinics for area high schools and a summer forensics institute that includes more than 100 participants from over a dozen states.

This release and images can be found online.