Elizabeth Callaway: Cutting-edge Scholarship at the Intersection of AI and the Environment
By Allison Field Bell 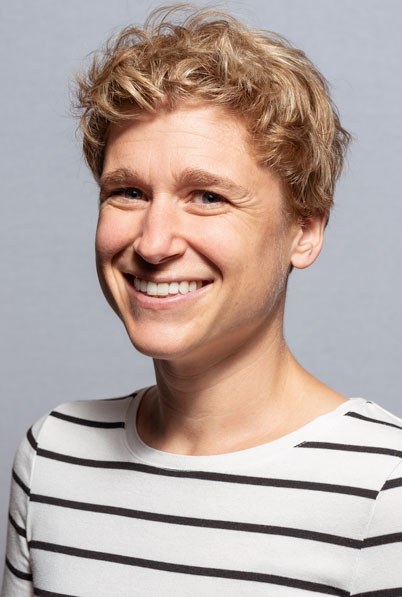 According to Elizabeth Callaway, assistant professor of English at the University of Utah and affiliated faculty with the Environmental Humanities Graduate Program, the problem of artificial intelligence is not just a scientific or engineering problem, it’s a cultural problem. And it’s one that has escaped criticism for far too long. Her upcoming book is an exploration of AI and the nonhuman environment, but it started out as something quite different. The seedling for the project began, like so many projects, with a deep personal interest. Callaway became fascinated – and horrified – by social media recommendation algorithms that fulfill their mission of keeping users on platforms by sequentially recommending slightly more extreme content. The result is polarization and radicalization of individuals and society. “AI,” she says, “has been affecting us on social media without us realizing it for a long time.” Initially, Callaway thought this was a personal interest, one that emerged from thinking about screens and the developing brain in relation to her own family, but she realized that AI actually touches every aspect of our lives and that AI extends beyond the human to affect the nonhuman world. Running AI, for example, is extremely energy intensive with a notoriously large carbon and water footprint.

This realization also came paired with another realization that there is less attention being paid to what AI is doing to animals, plants, and ecosystems, a kind of gap in the cultural criticism available – one that Callaway could at least begin to fill with her research. In all aspects of her research and scholarship, Callaway sees what she does as bringing science into conversation with the humanities. This is certainly the case for this current book as her research includes real-world applications of AI as well as literary portrayals of AI in novels, video games and children’s fiction. Callaway draws from a wide variety of texts because not all impactful cultural portrayals will come from traditionally “literary” sources. Science fiction novels and games, for example, “excel at making our thinking more visible to ourselves, which can give insight to why we’re doing the things we’re doing with AI in the real world. In addition, these imaginative, fictional texts can function as thought experiments delimiting the possibilities of how we think about AI.” Conversely, the engineers in the real world working on AI often write about it in science fictional terms. Paying attention to these science fiction narratives might help to situate a better, more thorough understanding of AI.

But AI is not just the havoc-reeking technology she expected. In addition to the many ways people are trying to use AI to protect the natural world, Callaway was pleasantly surprised (but also somewhat unnerved) to find certain types of AI rather delightful to use. There is Midjourney, for example, an AI that creates completely novel visual art that is sometimes astonishingly beautiful and sometimes hilariously strange. There’s GPT-3, an AI that will generate a surprisingly cogent if completely generic piece of writing when given a prompt by a user. And there’s Quick, Draw! which uses a neural network to guess what you’re drawing in 20 seconds or less.

Many of these instances of AI were shared with Callaway by her colleagues at the National Humanities Center Responsible AI Curriculum Development Program – a symposium she participated in during the summer of 2022. Part of the program includes an award to develop a course in Responsible AI, which she is slated to teach during the school year 2023-2024. The course, to be taught through the English Department as “Digital Cultures: Responsible AI” is an example of how Callaway sees her research as inseparable from her teaching. She views this course as an opportunity to share something she’s really excited about with her students. With AI in particular, she also sees it as an opportunity to reach students across campus in different disciplines and to teach students outside the humanities to dwell in these complicated ethical questions.

Ultimately, Callaway sees this book project and course as using literature to address a large problem in the real world. She says, “AI is often sold to us as the answer, the more objective way to do things because a computer is used. People imagine that AI eliminates human bias, but it doesn’t. It is created by human beings, and it’s trained on the data we generate. Famous examples like Tay, Microsoft’s racist twitterbot, show us the extent to which biases are baked into AI.” And because of this, there desperately needs to be more criticism from every discipline to address issues of AI.