Is Reading Dangerous (Again)?
A Conversation with Azar Nafisi 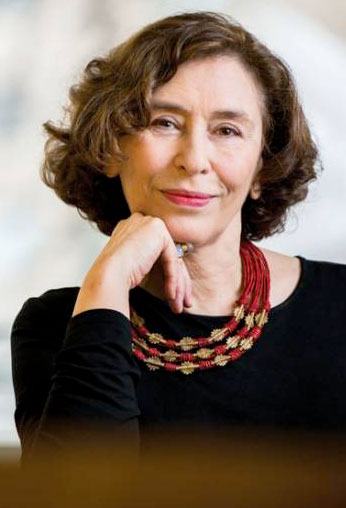 The banning of literature and the silencing of authors continues to be on the rise. The news is full of stories of books being pulled from the shelves of public school libraries. In August, prizewinning author Salman Rushdie was attacked onstage after decades of hiding in response to death threats for his book, "The Satanic Verses.” According to Azar Nafisi, bestselling author of “Reading Lolita in Tehran: A Memoir in Books,” books are a threat to those who seek to rule through absolutism. Their power resides in the way they allow us to imagine lives lived differently from our own and to resist the imposition of any one particular way of life.

Born and raised in the Islamic Republic of Iran, Nafisi was accustomed to censorship and the closing of bookstores. Now, living in the United States, she sees parallels in the country’s attempts to oppress ideas and imagination by banning books. She believes books are especially dangerous to those with a totalitarian mindset – which is on the rise in many parts of the U.S. – because fiction is democratic in structure.

Nafisi will further explore these ideas when she joins the Tanner Humanities Center at the University of Utah during Banned Books Week for an unscripted conversation about the role humanities and liberal arts play in the preservation of democracy to be held at the Utah Museum of Fine Arts, Thursday, Sept. 22, 4 p.m. The event is free and open to the public, but registration is required. A book signing co-hosted by the King’s English Book Shop will follow the event.

A New York Times Bestseller published in 32 languages, Nafisi’s book, “Reading Lolita in Tehran” chronicles the lives of seven young women – some conservative and religious, others progressive and secular, several who spent time in jail – as they gather at Nafisi’s home in Iran each week to read and discuss forbidden works of Western Literature, such as “Pride and Prejudice,” “Washington Square,” and “Lolita.” The book also includes accounts of Nafisi’s experiences in the early days of the revolution, when she started teaching at the University of Tehran amid the swirl of protests and demonstrations.

“The only thing worse than banning books is banning literacy,” said Hollis Robbins, dean of the College of Humanities. “We are delighted to host Azar Nafisi to talk about the importance of teaching and the power of writing.”

Nafisi came to the United States to earn her doctorate at the University of Oklahoma during the 1970s. Afterwards, she returned to Iran and taught English at the University of Tehran. In 1981, she was expelled for refusing to wear the mandatory Islamic veil and did not resume teaching until 1987. She taught at the Free Islamic University and Allameh Tabatabai, and then held a fellowship at Oxford University, teaching and conducting a series of lectures on culture and the important role of Western literature and culture in Iran after the Revolution in 1979. Nafisi returned to the United States in 1997 — earning national respect and international recognition for advocating on behalf of Iran's intellectuals, youth, and especially young women. Her latest book, “Read Dangerously: The Subversive Power of Literature in Troubled Times,” explores the power of literature in times of political unrest.

About The Tanner Humanities Center

The Tanner Humanities Center at the University of Utah is proud to be celebrating 35 years of promoting humanities inquiry and exchange. The Center supports innovative scholarly projects and creates opportunities for interaction among scholars, students, and lifelong learners. It offers programs in three major areas: public outreach, educational enrichment, and academic research. The activities reflect a vision of the humanities as not only relevant, stimulating, and cutting-edge, but also essential for developing critical thinking, tolerance, and respect on campus and in the community.