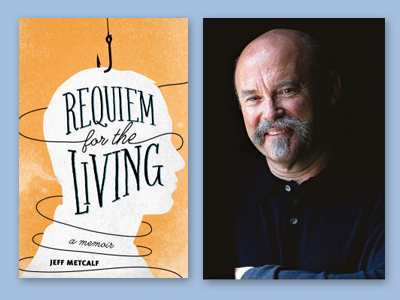 Congratulations to Professor Jeff Metcalf, who received the 2015 Salt Lake City Mayor's Artist Award for Literary Arts for his contribution to arts in our community. Metcalf’s most recent book, Requiem for the Living (Univ. of Utah Press, 2014) has received rave reviews.

About Requiem for the Living

After nine years of keeping his prostate cancer at bay, the drugs were no longer working. The doctors told him his time was nearly up. Jeff Metcalf used this diagnosis as motivation to dive deeper into writing, tasking himself to write one essay each week for a year. His collection of fifty-two essays was chosen by the Utah Division of Arts and Museums as the winner of their 2012 Original Writing Competition. Requiem for the Living contains the best of these essays, selected and reworked by the author, who continues to defy his medical prognosis.

The essays form a memoir of sorts, recounting good times and critical moments from Metcalf’s life. Often funny, sometimes moving, profoundly personal, they draw from Metcalf’s rich experience. He does not describe a life defined by cancer but writes to discover what his life has been, who he has become, and what he has learned along the way. Ron Carlson, author of A Kind of Flying, says, “This is a truly unusual book! What Jeff Metcalf has accomplished in his collection of essays is to write an intimate and frank book about a life well lived. It is a dear and personal book that increases the supply of affection in the world and adds mightily to our shared kindness. Requiem for the Living is a memoir with a unique wavelength—it should be on everyone’s night stand.”