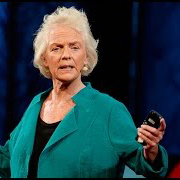 Philosopher and bioethicist Peggy Battin talks on TEDMED about the life and death of her husband, Brooke Hopkins, who was a distinguished professor with the University of Utah College of Humanities. Watch it here.

Roger Brooke Hopkins, born in Baltimore, was educated at the Gilman School, Hotchkiss, and Harvard University, where he also taught for five years. His academic training included a year on fellowship at Oxford. He began teaching at the University of Utah in 1975. He won the University of Utah Distinguished Teaching Award, was University Professor, and served as the Chair of the English Department. He was an energetic outdoorsman and an intrepid world traveler. Shortly after he retired in 2008, he was injured in a double-bike accident that left him paralyzed. He continued to teach in the OSHER program for adult students, offering courses from the Iliad to Moby Dick before the time of his death.