At 90 years of age, you’ll still find Floyd O’Neil in his book-filled office in the University of Utah’s American West Center, where he has worked since 1966 and where he served as director for 11 years. As director emeritus, his institutional knowledge and ability to remember every name, date, book and fact is priceless to the 54-year-old center.

“Floyd’s impact on the center is impossible to overstate,” said Greg Smoak, the current director of the center and former student of O’Neil’s. “As a staff member and then assistant director and director, Floyd was largely responsible for building and maintaining the center’s ongoing relationship with American Indian peoples. I also know of no better mentor. He created an environment at the American West Center based on teamwork and respect that allowed young scholars to do important work.”

A career leading to the preservation of American Indian history started when O’Neil was just a child growing up on a reservation near Fort Duchesne, Utah. A third of his class were American Indians including his seat mate, whom he grew to be great friends with. The relationships he established would eventually inspire a career lasting more than half a century. 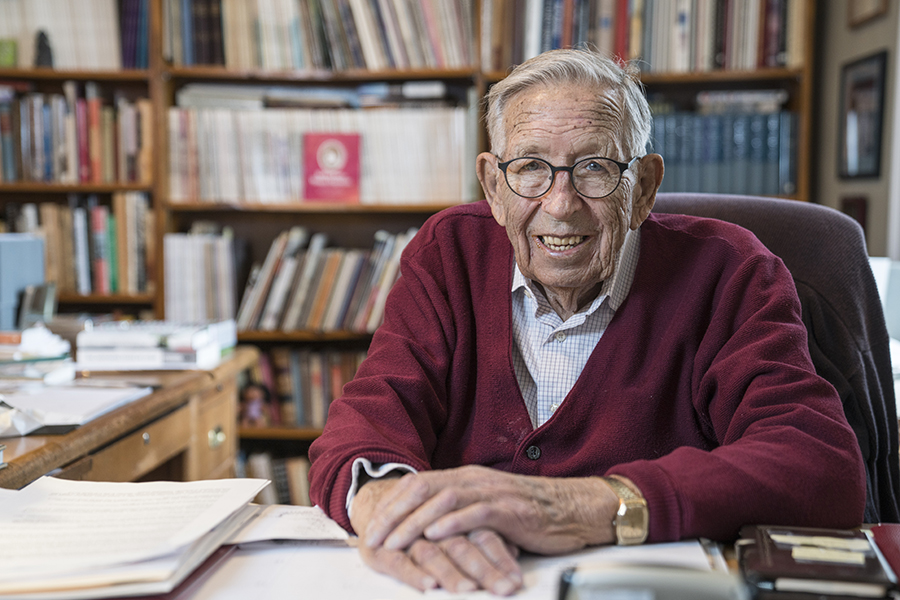 The son of a coal miner, O’Neil never imagined going to college or much less having a long and distinguished career in academia. However, a series of events as a child and a young adult would lead him to the University of Utah.

His education and future were halted due to lasting effects of rheumatic fever during WWII. Because he couldn’t climb the stairs at school, he wasn’t allowed to finish high school and because he couldn’t pass a physical, he couldn’t enter the military or become a coal miner.

Fortunately, he had a mentor, Harold L. Bithell, who tutored him and encouraged him to continue his education. Lacking a high school diploma, O’Neil was granted admission to Carbon College (now Utah State University Eastern) based on an ability test, then attended the U and graduated with a major in history and a minor in biology in 1957.

After graduation, he began teaching American history and American problems in Carbon District with an annual salary of $8,111.

“My father thought I was insane. He thought I should be a salesman for the Ford Corporation and sell cars. He told me I would make a hell of a lot more money than a school teacher,” said O’Neil.

His teaching career in Carbon County ended after a “knock-down, drag-out” debate with school administrators over lowering standards. He soon found himself back in Salt Lake City teaching at South High School and in 1963 returned to the U to study for his doctoral degree in American intellectual history.

Two years after its founding, the American West Center received a grant from tobacco heiress Doris Duke in 1966 to record the oral histories of native peoples. Because of his unique ability to connect with native peoples, he was asked to help gather interviews from tribes such as Navajo, Ute, Tohono O’odham, Shoshone, Paiute, Hupa, many of the Pueblos and several others.

“The tribes trusted Floyd because he made a strong and sincere effort to connect and engage with everyone,” said Smoak.

Duke funded oral history projects with seven universities, but the U’s ended up being the largest collection with 1,458 oral histories, some of them in the native tongue, that resulted in 16 volumes of tribal histories. The Marriott Library houses the entire collection.

Importantly, O’Neil emphasizes, the copyrights belong to the tribes.

O’Neil was instrumental in introducing tribal histories to American Indian students at the 7th grade level and he considers the center’s curriculum development projects of be one of his greatest achievements. Today, the legacy of that work is the Utah Indian Curriculum Project, that teaches children about their own history and heritage through teaching guides and lesson plans.

“As a school teacher, I learned that preparation is everything. I looked at my own home community and realized — short of field trips — there had to be something more than what they were doing. There wasn’t enough history being taught.”

Although, the Duke project and the tribal histories are his most visible accomplishments, it’s the successes of the people around him of which he is most proud. He speaks highly of former students who have gone on to do great research, of tribal members who have made impacts in the community, staff members who moved onto to prestigious jobs and friends who have helped him along the way. He calls everyone by their full names, remembers their degrees and recites their distinguished resumes from memory.

Two of O’Neil’s former students, whom he speaks fondly of, have gone on to have long and remarkable careers at the U. His pride of both Smoak and Gregory Thompson, associate dean of special collections at the Marriott Library, is clear.

“Fifty-two years ago, at Ft. Lewis College in Colorado as a visiting instructor, I taught Gregory Thompson and two years later, I urged him to come to the U. He worked for the center for 16 years and has been an avid supporter since,” said O’Neil.

Of Smoak, he said, “Gregory was one of the many scholars who studied here for an advanced degree. He became a professor at Colorado State and was then hired back at Utah. We are exceedingly pleased he is here as the current director.”

Along with his wife, Shauna, of 48 years – who he met at the U while “going with someone else” – he believes in discovering ways to give back to society and in leading a life that follows that principle. For O’Neil, that means committing a lifelong career to preserving the history of American Indians and other minority groups and not stopping, even at 90.

Founded in 1964, the American West Center – the first of the western study centers in the U.S. – researches the history and culture of the American West. Over the past half century, the center has completed more than 7,000 oral histories, including 2,000 American Indian interviews. Approximately 1,450 staff members and students have worked at the American West Center since it was founded and it wouldn’t be surprising if O’Neil remembers all of them by name.