Reminders of Resilience: A Day with Joy Harjo 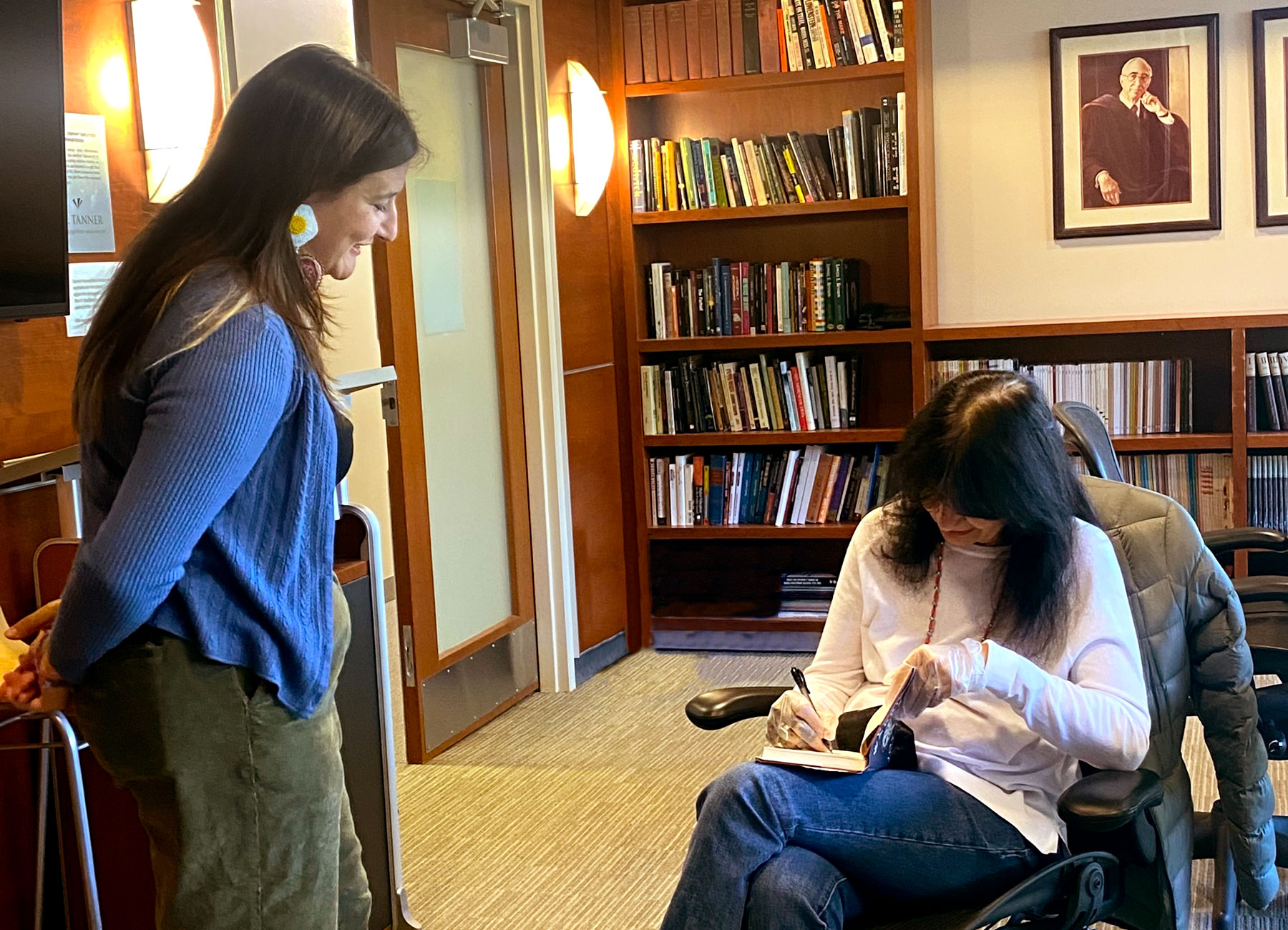 I was standing on a subway platform in Brooklyn, NY in April as the sun was just hitting the top of the station. I was on the phone with my parents who were back home, almost four hundred miles away in Norwood, NY. I was finishing my gap year between my undergraduate degree and the start of my graduate program at the University of Utah in the fall. I had just gotten the news that I would be working with the Tanner Humanities Center to help facilitate events with writers and humanists on campus.

“Joy Harjo is the guest speaker!”

The train was pulling in and I had to yell over the roaring wind.

“JOY HARJO IS THE GUEST SPEAKER!”

I lost service as the train went underground and then spent the next hour of my commute home in a haze of excitement, thinking that my fifteen-year-old self would not believe I was going to be in the same room as a writer whose work had been so instrumental in my life since the moment I first read her poems in middle school.

Five months later I was sitting in a glass-walled room called The Jewel Box in the Tanner Humanities Center at the University of Utah, and in front of me sat former Poet Laureate and Muskoke writer Joy Harjo surrounded by other Native students and faculty. She began by reading a passage from her new book “Catching the Light,” part of Yale University’s “Why I Write” series. It tells of her time in college and the gatherings at the local Indian Bar. It speaks of trauma and isolation but also of a hopeful resilience. I looked around the table and saw each gaze fixed firmly on Harjo, holding each other within this space. When she finished reading, Jeremy Rosen, acting director of the Tanner Humanities Center, opened the conversation to questions. Immediately, students were eager to be heard. The questions all began with messages of gratitude and admiration. Students took a moment to introduce themselves, their tribe and their personal expressions of appreciation for Harjo and her work. Students spoke of their struggles to find their voice and how they felt Harjo was a great role model in their lives. Harjo encouraged them to tell their stories, revealing that she herself had not grown up knowing she would one day be a writer but that she felt called to it, to share her stories with and for others. I felt the genuine outpouring of love so strongly in the room and found myself having to look down to hide welling tears. It was a feeling I had been missing.

I moved to Salt Lake City from New York about two months prior to attend the U’s Environmental Humanities Graduate Program. I had only ever lived in New York State, growing up on the border of Canada and then moving to Manhattan for college. I had never been more than a few hours' drive away from my community before and so I found myself looking for traces of home on campus or in the city. It was not easy, so far from the sugar maples and wandering snipes. I’d spent many drives in the Salt Lake Valley looking up at the beauty of the Wasatch, but only thinking about Akwesasne and the St. Lawrence River and my parents driving me home over the Cornwall Bridge. Sitting in a room amongst other Native students voicing feelings of vulnerability and interdependence, I felt myself closing the gap between me and home, those thousands of miles between us disappearing. It was not my community, but many of the themes and emotions were the same.  I relaxed into the conversation with a sense of ease that does not always come naturally in other non-native spaces on campus. I was listening in a space of mutual understanding and care. It was a gift to share that space with Harjo and to connect with other Native students.

When the luncheon was over, I waited in line, clutching my copy of “Poet Warrior” and speaking with other students about how incredible the conversation was. We talked about upcoming Native gatherings on campus and the best way to get other students involved. When I reached the front, Harjo took my book and I told her I was Kanienʼkehá:ka and grew up bordering Akwesasne. When she asked how I had ended up all the way out in Utah, I told her of the program and research opportunities. I came to the U for the incredible support offered by the Environmental Humanities program in the hopes that it would allow me to do research and write about issues concerning environmental justice and resistance to colonial occupation in my community back home. She nodded and told me that sometimes you have to leave a place to really know it. I left the talk and called my father on the way to my next class, out of breath as I tried to communicate my excitement and make it across campus.

That evening I made my way to Kingsbury Hall for the final part of an eventful day. Harjo was joining the Tanner Humanities Center for a reception with faculty, staff and community members before giving a free public lecture. I helped check people in, passing out name tags and watching the seats fill up. As I waited, I spoke with many wonderful people, some were attending the reception, others just the event. We spoke of beading techniques and bone carving and the communities we call home, exchanging compliments about the other’s earrings while slipping in important contextual details about our backgrounds, finding brief moments of unity in the small talk before the next guest arrived. I met Dave John, co-host of the Living the Circle of Life radio show on KRCL, who told me about upcoming events and their Indigenous People’s Day show. For the first time since I had arrived in Utah, I watched as Indigenous people and Indigenous voices filled a magnificent, decorative space. There is no shortage of moments to grieve as an Indigenous person, and these moments are important and necessary, but here was a moment of celebration and at the center, the power of Harjo’s work uniting us all.

The event was beautiful. Harjo read more of her work and answered questions from the audience about remaining strong in moments of grief and centering community even when structures of settler colonialism were actively working against you. I found myself, along with others in the audience, quickly moving between moments of tears to outbursts of laughter, Harjo’s dry humor effortlessly woven throughout her answers to such difficult, personal questions. I waited after to attend the book signing with a few of my classmates. In line, we spoke with strangers next to us about the event we had just witnessed. We shared feelings of awe and commented on which books we were holding to be signed. The normal preconceived notions of impermeable barriers between strangers seemed to have weakened, all of us bathing in the expressions of honesty we had just experienced. I approached the table and Harjo reached out a hand to take my stack of books, “Skylar! It seems like I keep seeing you everywhere!” I smiled so wide my face hurt and felt another wave of gratitude for the living legend in front of me, who had done it all so that someone like me may have a pathway forward.

Just twelve hours later, I was on a plane back east to see my family. Waiting in the terminal at the Montreal airport, my backpack was heavy with the signed Harjo’s books for both my father and me. Shortly after my mother pulled into the pickup zone, I learned that my Aunt Lynn, my father’s sister who had raised him since he was a boy, had passed away that afternoon. I spent the following week caring for my father and helping make funeral arrangements. One afternoon, days before the funeral, I was sitting with my father and mother in the Akwesasne Cultural Center holding a copy of “An American Sunrise.” I flipped to the poem titled, “Washing My Mother’s Body,” and began to read. The poem is a moving meditation on grief and how loss requires a specific kind of attention. Harjo wrote of preparing her mother’s body as she was not able to physically do so, and as I read I knew my father was closely feeling the pull of her writing. Her words opened a space for connection, for my father and me, for us and Harjo, for my father and his sister. It bridged a space between all of us, even those who were not here with us in body anymore. This sharing of story to deepen community is a traditional way for so many Indigenous people and has been for time immemorial.

I flew back to Salt Lake City only days later, still thinking about Harjo’s visit to the U. As I drove back through the valley, the Wasatch rising before me over the interstate, I thought about all what had already occurred in only two months here, the gratitude for this place seeping into my bones and melting away the sorrow of loss. As I pulled into my driveway, my phone lit up with texts from my classmates asking if I was around to study before class. I threw my backpack in the car and took off for the U, realizing that for the first time my mind was preoccupied with the here and now. I still carry home with me, but I find myself looking forward to the unfamiliar experience of this new home, a burgeoning hopeful resilience in the anticipation of the unknown.