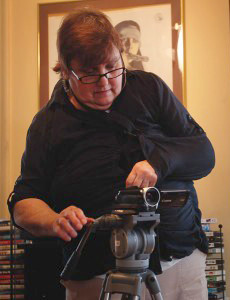 University of Utah English professor Jeff Metcalf ’s epiphany came eight years ago as he was teaching adult high school students enrolled at the Salt Lake City School District’s Horizonte Instruction and Training Center. Many of the students were dropouts, and none had ever had any contact with a university before. Their education had stalled when life got in the way, and Metcalf worried about them. He was also intrigued. “What fascinated me most were the stories that happened before and after class—stories about people who had come to this country for political asylum, refugees, people who had been on the streets, who were homeless, people who had never had a place for their voice to be heard.”

Metcalf BS’74 MEd’77 wondered how he could provide space in a university setting for people who had never thought their experiences and opinions mattered. “I thought, ‘Wouldn’t it be great to create a documentary class and teach them how to make documentaries so they felt less invisible? ’ I made a promise to these students that we would do that.” There was only one problem, he says: “I realized I knew absolutely nothing about documentary filmmaking.”

But Craig Wirth BS’73 did. Metcalf had met the fellow professor, an Emmy Award-winning documentarian, once or twice in the hallway at the U’s Language and Communications building. Metcalf ’s office was right above Wirth’s, so he introduced himself and explained his idea. “I told him, ‘You just need to meet some of these students,’ ” Metcalf recollects. “After that happened, there was no turning back for either one of us"... read more